He has a Bachelor of Outdoor Education and Nature Tourism from La Trobe University in Bendigo, specialising in Experiential Education with a Diploma of Education from Charles Sturt University. 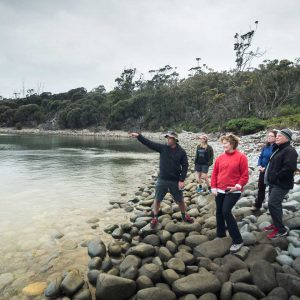 I am Tasmanian and I love my island home.

My family story in Australia began as convict First Fleet arrivals to Sydney in 1788, then later with British settlement of Van Dieman’s Land when ancestor Robert Carter Alomes (British Marine on the vessel Ocean), was sent ashore in 1804 by lieutenant governor David Collins with the flag raising Party to establish Hobart.

My family have multi-­generational links to the Tasmanian East Coast through business and farming across eight generations.  I grew up on East coast in a home built on Maria Island by the pioneering Italian and Maria Island entrepreneur Diago Bernachi. Exploring, adventuring and later working on the Island as an education ranger with the Tasmanian Parks and Wildlife Service.

I currently specialise in the field of experiential nature-based adventure learning with a focus on story-­ telling and meaningful nature connection. I launched Tasmanian eBike Adventures in 2017 and commenced operating on Bangor in collaboration with the Dunbabin family, owners of Bangor Farm and developers of the Bangor Winery Shed.

In August 2018 I received a licence from the Tasmanian government to operate electric mountain bike adventures on Maria Island National Park which now incorporates adventures in the Maria Island Marine Protected Area.

Thanks to our partners